In 1873, the Township of Alpena was divided into the townships of Alpena, Long Rapids and Wilson. At that time, Long Rapids Township included parts of the present Montmorency County and all of Maple Rapids and Wellington Townships. On March 15, 1873, the Board of Supervisors of the County of Alpena met for the purpose of forming Long Rapids Township. Three electors were chosen: W.H. Marsten, J.O. Carr, and John Louden. They were the ones, whose duty it was to preside at each meeting , appoint a clerk, open and keep the polls, and exercise the same powers as the inspectors of elections at any township meeting. On April 7, 1873, the first Annual Meeting for the Long Rapids Township was held at the Jones School.

Long Rapids Township purchased the Maccabee Hall, after that organization discontinued. At a Township meeting in 1935 it was decided, due to the condition of the hall that it would be torn down. A new hall was built on a site that is located on M – 65 North near the Thunder Bay River, adjacent to the Long Rapids Emergency Facility housing the fire and rescue trucks as well as meeting space for the township board. 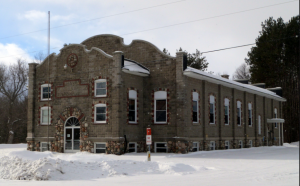 The Long Rapids Township Fire Department began in 1962 with a vote at a Township meeting. A volunteer fire department was organized and has operated ever since.

The Long Rapids Township purchased land in 1879 to be used as a cemetery. The other cemetery in the township belongs to the Leer Lutheran Church on Leer Road. 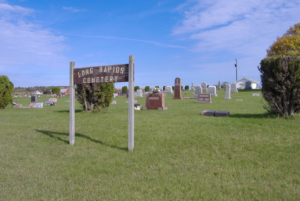 In 1854,the state of Michigan sold the land which is now the village of Lachine, to Charles Richardson, a lumberman. Many settlers came to the area before the village of Lachine was founded, some came from Pennsylvania, namely the Snyder, Kinsinger and Miller families. They engaged in farming and lumbering. Walter Morrison settled in the area about 1887 – 1888. Lumber camps were very plentiful  in the Lachine area and sometimes, the entire family spent the winters at the lumber camps working and clearing the land, which were then turned into farms.  From April 1916 to January 1917 Farm Goods valued at $100,000 were shipped from Lachine, $24,000 was from the sale of butter. Maple syrup was made on Andrew Sanborn Farm north of Lachine. One of the first businesses in Lachine was the “Hotel Lachine”.  It was constructed around 1909 near the tracks of the Detroit and Mackinac Railroad. In 1911, Floyd and Sarah Stoddard built the “Stoddard Hotel”, there also was the McClure store, which was later sold to the Wilson-Asselin Clothing Company. The Lachine Mercantile store was built about 1909 and was sold to Herman Goodman in 1911. The store burnt in 1917. A new one was built in its place which was named Nugent’s store, then Gleason’s store then it became Sheldon’s Grocery and finally Lachine Grocery and Deli. 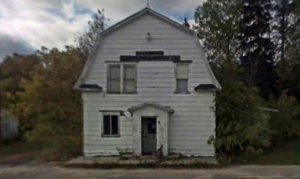 The Lachine Elevator was erected in 1916 and was located near the Detroit and Mackinac railroad tracks. the Lachine Bank of McColl, Learmont and Company was built between 1911 and 1913.

The Village of Long Rapids

The village of Long Rapids was platted in 1888. That year Hugh Mellon sold the land to the County of Alpena for the purpose of establishing a village, it was named Long Rapids after the Township in which it lies. Its population in 1885 was 160, in 2000 it was 1019. For current demographics, click this link current township demographics link

John Louden served as the first Postmaster in Long Rapids in 1873. By 1883 the mail came three times a week by stage. The Post Office was usually located in a store in the village. In 1933, the Post Office in Long Rapids was closed, and the Lachine post office began serving the area, as it continues today.I

The Settlement of Leer

Leer is located in the northern part of Long Rapids Township and is a Norwegian community. In the late 1860’s and early 1870’s, many people left Norway for a better way of life, and some land in Alpena. They settled first in Alpena’s northside near Lake and Clark Streets. Three men, Bernhard Enger, Otter Olsen and Andreas Christopherson, went to investigate the land around the Sunken Lake Area. They purchased land from George Fletcher, the Richardson Lumber Company and other companies. Several Norwegian families followed them, the Jacob Anderson, Martin Alfsen, Olaf Olson, Bjorn Halverson, Brent Larsen, Ole Nelson, Old Markusen, and Sven Rude families. They named their settlement Leer after the town of Lier  in Norway.

The first store in Leer was Carl Alfsens’s  store. Among the many other businesses were Michael Elowsky’s Flour and Sawmill, Neil Bensen’s  Blacksmith’s Shop,  Byron Newton’s Lime Kiln, Anderson’s Livery and Jacobson’s Livery.

The Leer Post Office was organized in 1901 it was located in Carl Alfsen’s Store, he was the first

In 1881, Mr. and Mrs. Otter Oleson deeded land on Leer Road to Long Rapids Township to build a Norwegian School. In 1908, the first Leer School was built on land once owned by Karl Anderson. Mr. and Mrs. Andrew Bensen deeded property in 1927 to  Long Rapids Township to build a new school in Leer. The Leer School was south of the Leer Lutheran Church on Leer Road. In 1928, the Leer  School replaced the Norwegian School and the first Leer School. insert picture here of schools long Rapids School in 1943

In 1960, all Long Rapids Townships Schools consolidated with the Alpena Public Schools.

Charles Keating owned and operated a stopping house named “The Long Rapids House”.  It  was located east of the village of Long Rapids in 1889.  During the early 1990s, Lon Loomis operated the “Loomis House” east of the intersection of M – 65 north and Long Rapids Road . Other hotels or stopping houses belonged to  Willis Bartley and Henry Hodgins.

The area had a number of general stores . On was located east of the M – 65 north and long Rapids Road intersection.  It was originally owned by John Ferguson and Joseph Cavanaugh, later it belonged to Mr. and Mrs. Hiram Marston and was known as Marston’s Store. Then it became McClure’s Store. Another general store was on the northwest corner of M-65 and Long Rapids Road in 1887, it was owned by John Ferguson, then it was sold to Mr. and Mrs. Jacob Niergarth and was known as Niergarth’s  Store. Two other stores operating in the vicinity were a small dry goods store, owned by Mrs. M. Leroy and a small general store, owned by G.W. Brown. The Long Rapids Market building, built in 1962, still exists but is closed as of today in 2021.

There were two garages:  one was built in the 1970’s by Dale Manning and is owned by Donald Berry; the other is located near the corner of Long Rapids Road and Second Street; it was operated by several residents.

In the early 1900’s,  a cheese factory was in existence near John Keating’s farm.

The following is a list of churches in Long Rapids Township.

The Grace Episcopal Church was also started in 1882 and it was located on Long Rapids Road, about 1/2 a mile west from the intersection of Long Rapids Road and M-65 North.

The Methodist Episcopal Church in Long Rapids Township was erected in 1882 and discontinued use around 1924- 1925, since it needed a lot of repairs. The congregation merged with the First Congregational Church of Long Rapids in 1925. insert pictures here

In 1903, the Long Rapids Grange was organized. John Butler, Mr. and Mrs. W.A.  Hall and John Dunford were among those active in the Grange. The Grange worked with the Department of Agriculture to promote farm education The Grange held many annual picnics.

The Independent Order of Odd Fellows (I.O.O.F)  was organized in 1895. Its members founded a system of benefits and helped each other in time of need. Homes were established and maintained to care for the aged and orphans. After their organization, the following officers were elected: N. G. – Peter A. Wilson, V.G. – Thomas Boynton, Secretary – William A. LeRoy, Treasurer – John Dunford, Rep. – A. Harshaw, Trustees – David McNeil, John Dunford, and Peter Wilson. In 1899 the Rebekah Branch of the I.O.O.F was organized in Long Rapids. Their focus was visiting the sick, relieving the distressed, burying the dead, and educating the orphans. Their lodge  was discontinued after being active for several years. At a meeting in 1935, after discussion about reinstating the Rebekah Branch,  they were reinstated in 1937. It was known as the Rebekah Lodge No. 418.

The Maccabees were organized and Long Rapids in 1893.

The International Order of Good Templars had a lodge in Long Rapids in 1876. It is no longer active.

Long Rapids Township is home to several “Sink Holes”. They are located on M-65 and Leer Road which includes Sunken Lake. 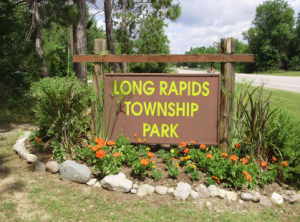 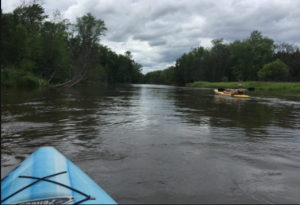 The first Long Rapids Fair was held October 10th and 11th, 1912. It was a grand success, W.A.  Comstock was present and said he did not see as fine a Fair at the State Fair. The largest number of people ever gathered in Long Rapids and was present to see the fair. In the horse race, “Greeley Boy”, owned by Douglas Morrison won the race in three straight heats. “Chester Burt” owned by Homer Goodrich, placed second. “AP”, owned by Lon Loomis came in third. The race was exciting and was run on the Main Road. There was also a team pulling contest. A dance closed the evening’s entertainment.  The officers for the Fair Association were: President – Frank Moore, Vice-President – J.W. Purdy, Secretary – W.A. Leroy, and Treasurer – E.J. Horton.